A Stand Up Comedy Event at Hop & Barrel 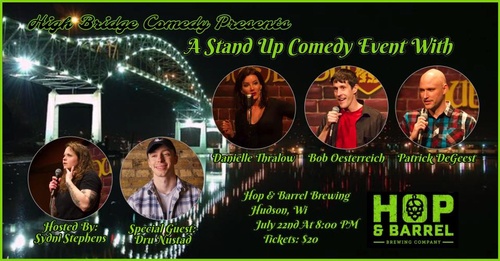 High Bridge Comedy is proud to bring their premier brand of comedy to Hop & Barrel Brewing in Historic Downtown Hudson, Wisconsin.
With over 30 years of stand-up comedy experience, headliners Danielle Thralow and Bob Oesterreich have entertained audiences all over the country. Come enjoy an evening of laughter and entertainment with their unique blend of intellectual comedy, dark humor, social observations, dad jokes, and blatantly honest self-awareness.
YOUR HEADLINERS:
Danielle Thralow is the regular host of the Dubh-Linn's Pro Comedy Tour. She has performed throughout the United States, winning Miami's Funniest and was first runner-up at ACME Comedy Club's funniest person in the Twin Cities. Danielle is a regular guest on the Los Angeles-based 'Dat Phan and Friends' and has been invited to numerous events, including the 2021 Seattle International Comedy Competition. She is the reigning #1 comic on the Dark Web.
Bob Oesterreich was born and raised in Duluth, Minnesota. At the age of 5 Bob had his picture taken with Boss Hogg from The Dukes of Hazzard. Since that day Bob has not accomplished anything worth mentioning. One day, Bob plans on losing his virginity...if you’re interested. Until that day, Bob likes to pass the time by telling stupid jokes to people. Bob's comedy has been described as a naïve psychopath living in Mayberry. Remember death comes for us all. So why not laugh at some stupid jokes while you wait?
Featuring: Patrick DeGeest
Special Guest: Dru Nustad
Hosted By: Sydni Stephens
Business Directory Events Calendar Hot Deals Job Postings Contact Us

Google Yahoo iCal (Outlook, Apple, or other)
Scroll To Top